GAINESVILLE, FL (April 2, 2018) The Goldwater Foundation has announced that University of Florida sophomore Aaron Sandovan (pictured) has been selected for a Goldwater Scholarship. UF junior Andrew Sack was also recognized by the Goldwater Foundation with an Honorable Mention. Both students are members of the UF Honors Program. 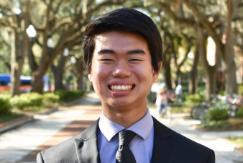 The Goldwater Scholarship was created to encourage outstanding students to pursue careers in mathematics, the natural sciences, or engineering, and to foster excellence in those fields. This year 1280 students from 470 institutions were nominated for a Goldwater scholarship. The foundation named 211 new Goldwater Scholars and identified 281 students as Honorable Mentions.

Sandoval is junior majoring in biology and plans to earn an MD and a PhD in Stem Cell and Regenerative Biology in order to pursue research a research career in regenerative medicine. He completed a Brigham Research Institute Internship at Harvard Medical School in summer 2017, and is a University Scholar here at UF, conducting research in Dr. Malcolm Maden’s lab.

In awarding scholarships, the Foundation considers the nominee's field of study and career objectives and the extent to which the individual has the commitment and potential to make a significant contribution to his or her field. Each scholarship covers eligible expenses for tuition, fees, books, and room and board, up to a maximum of $7,500 annually. Students must receive a nomination from their institution in order to apply for the Goldwater scholarship. Each application requires an essay discussing a significant issue or problem in their field of study that is of particular interest to them.