UF doubles its previous record for the award set in 1994. 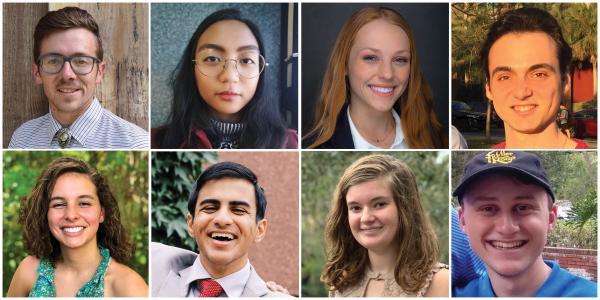 This article orginally appeared in UF News and was written by Emily Cardinali.

The Boren Awards grant scholarships and fellowships to students who would like to study languages and cultures of regions important to U.S. national security interests. After completing a long-term study abroad program and graduating from UF, each student will work for the federal government for one year. Previous to this year, UF’s highest number of Boren recipients was four – in 1994. The achievement represents an emphasis by UF to increase access to high-impact opportunities, like study abroad and second language development, nurturing a global mindset among students.

"Having this many students get the Boren starts with how lucky we are at UF to have so many languages to offer to our students," said Kelly J. Medley, the external scholarship and fellowship coordinator for UF. "It's ingrained into the university culture."

"As a university, we embrace global learning and culture. But we also have an incredible culture of service at UF," Medley said. "Our students are often interested in learning the language and culture then working for government agencies" like the United States Agency for International Development (USAID) and the Peace Corps.

For Nico Huergo, a UF Boren recipient, the scholarship gives him the opportunity to follow in his grandfather's footsteps. After Nico returns from studying in Poland and graduates from UF, he hopes to pursue a career in the U.S. Foreign Service. His grandfather, Marcelo Huergo was a diplomat for the Argentine government.

"I want to do the same thing and serve the U.S. — my country — in that way," Nico Huergo said. "International politics and diplomacy are crucial but also very enjoyable."

He will study Polish for the first time in Poland, but through family trips, already feels like Poland is a second home. "People in Poland love a lot of the same things that people in Argentina love, even though they're on opposite sides of the world," he said. "The people seem to have similar attitudes toward life and similar ways of seeing things. The culture just feels so familiar."

Any undergraduate or graduate students interested in applying for future Boren Awards or other fellowships should contact UF’s External Scholarship & Fellowship Coordinator, Kelly J. Medley, at kmedley@honors.ufl.edu for more information. For the upcoming application cycle, our campus deadline is Friday, January 8, 2021 at 5 p.m. EST. Faculty interested in serving on our campus application review committee can also reach out to Kelly at kmedley@honors.ufl.edu. 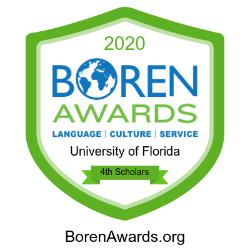